The date to the handicap event has now been changed to Friday the 15th of March. We apologise for this but is down to Suppliers not delivering. Please make a note in your diary

Shamon Ishida winner of the Premier Division and Alan Crouch winner of Division 1 picture above. Group results Premier Division S Ishida Division 1 A Crouch Division 2 J Dart Division 3 S Oktar Division 4 D Oktar Well done to all the winners Officially next week is the last of week of the Winter, Awards to be presented end of March. But a New Summer League coming soon. More details will be posted on the website www.sanfordttc.co.uk Please register for the last weeks league ev 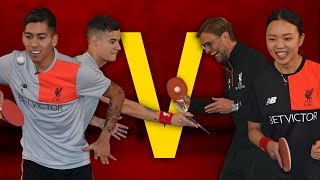 LIVERPOOL STARS GET IN ON ACTION

Is this the secret behind Liverpool success playing the best game in the world?

Picture above is Tom Penfold winner of Division I Winners of Groups DIVISION I Tom Penfold DIVISION 2 Hayate Igami DIVISION 3 Liam Kanyepi DIVISION 4 Finley Macnaughton Congratulations to all the winners, will be any changes next week keep in the loop checkout the coming events www.sanfordttc.co.uk

Sanford TTC took three teams to Dauntsey's on Sunday to compete against teams from Dauntsey's, Warminster, Kennet Vale, Salisbury Malmesbury. there 5 teams in two Divisions. Sanford A started with a win against Dauntsey's A 7-2 Shamon and winning there matches Charlie playing the A team for the first replacing Nitya who was not available but could be available on the 17th of March. Then it was a battle of the giants against Warminster going down 5-4 Shamon winning all of his

EXCELLENT TURN OUT A BAT TESTING

Friday nights bat test event proved very successful. There were 22 blades and 44 different rubber combinations and very latest blades.Players taking advantage of 30% off catalogue prices Many players showing interest. Further orders being placed today. Thank you all for attending and big thank you for the helpers too.

Due to the successful event last year we are staging another handicap tournament scheduled 8th of March 2019. Players must be registered with TTE to play in this competition. It is the best of three and up to 15 using 8 tables and using Sanwei balls promoted by TTE and used National events. We restricting entries to 32 due availability of tables. Please register on sanfordttc@gmail.com. Further information will be published on the website www.sanfordttc.co.uk

Come along to our Bat testing evening at Swindon Academy Beech Avenue SN 2 1JR on Friday 8th of February at 7.30 pm and try out different combination rubbers and blades from a leading Germany supplier and get 30% off all rubbers and blades from the catalogue prices, and make up is FREE. So if you are thinking of changing or buying a new Bat this will be a good opportunity for you to get a good deal. Also orders taken for shirts, socks, shorts and other miscellaneous prices